On Saturday, February 15th, the ISM Group organized, at the Doudou Ndiaye Rose theater in Dakar, the graduation ceremony of the 27th promotion MBA / Master 2019 - Feu Gabriel Fal - a former professor at ISM and expert in Financial Engineering, which has operated for many years on the financial markets.

Abdou Diouf, General Director of the ISM Group, recalls the heritage passed down by the late Gabriel Fal: “The choice made for the sponsor is not accidental. Entrepreneur and visionary he was! At the ISM we will remember him from the great professor, these conferences still echo in our amphitheaters. The late Gabriel Fal set up the first Investment Club with his ISM students in 1996 to promote stock market culture among students. We also owe him the establishment of the dealing room at ISM to support this dynamic. ”

526 laureates were present including 54% women and 46% men, mainly Dakar students, but also from the regions: Mbour, Saint-Louis, Thiès, and Ziguinchor were congratulated in turn, in the presence of their families sometimes from afar. This ceremony was the occasion to celebrate for their excellent results, the majors of promotion of each branch of the management school, the law school, the Madiba Leadership Institute, the school of computer engineers, and the Digital Campus.

Among the guests, some ambassadors and organizations honored us with their presence and came to applaud the students representing their nation: Spain, Chad, India.

The ceremony was followed by a gala dinner on Sunday, February 16th at the Museum of Black Civilizations, which will bring a beautiful conclusion to years of unforgettable studies! 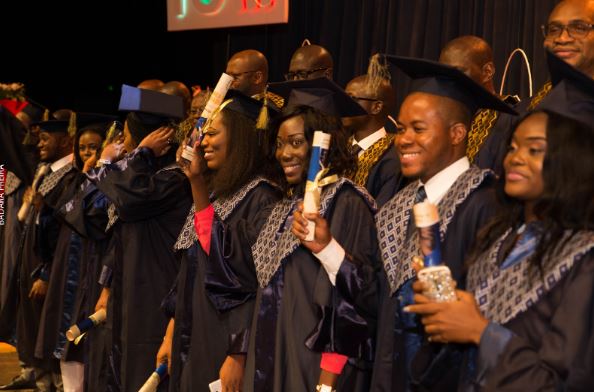 ISM, the best Business School in Senegal by EdUniversal

ISM Group was awarded with the 3 Palmes of excellence in the world ranking of higher education institutions. The Group thus confirms its leadership and its position as the first business school in Senegal, the only establishment in the country to gain 3 palmes in the world ranking.

Currently occupying the post of Administrative Manager for the Executive program of the ISM Group, she is the one handling and managing all the processes for the participants, planning flights for professors, assist or even organize meetings.

Since the beginning of the COVID-19 crisis in May 2020, the ISM Group has switched all the courses, both in bachelor's and MBA / master's degrees online, thanks to the partnership initiated by Galileo Global Education and Blackboard Collaborate, in order to allow all our students to continue studying in the best possible conditions.

Read more
DOWNLOAD BOTH THE APPLICATION FORM & THE BROCHURE